Mondays are not always the most exciting day of the week –

in fact they can rarely take that title.  Coming off of a weekend, you cannot expect the first day of the workweek to amount to much for inspiration.  Well, let’s leave Monday alone and let me try and inspire you with what I created just a few hours ago.  One of my new favourite special occasion and no occasion soups: Shrimp and sweet corn chowder pulled from Jamie’s Food Revolution.  I’ve made it a few times and am more impressed with it each time I make it.  It is simple, yet tasty, and almost decadent.  The best part – it isn’t too fancy with a long list of wacky ingredients.  In fact, most of the ingredients are probably sitting in your pantry or freezer right now.  I stopped and picked up what I needed on the way home from work tonight which amounted to leeks and cream!

Another great part of this soup is the incremental and easy preparation.  You use one pot (mostly) and start with rendering the bacon.  While that is happening you can continue to prepare the rest of the ingredients: wash and slice the leeks, peel and dice potatoes, shell shrimp – and that’s it!  You fish out the crispy bacon, cook the leeks and potatoes in the bacon fat, eventually adding frozen corn, shrimp, hot chicken stock and cream.  The recipe calls for heavy cream (which is American for whipping cream!) but I try to cut down on some unnecessary fat and substitute 18% cream.  I found the soup a bit bland the last time so I thinly sliced a red Thai chill and sprinkled that on at the end to add some colour and heat.

I find that quality ingredients always make a significant difference when cooking, baking and grilling.  Part of that skill is to determine where to scrimp and where to splurge.  In this soup, since most of it is whizzed up with a hand blender, it doesn’t matter how large or plump your shrimp are.  However, good quality bacon will help develop depth of flavour.  I had a half flat of house-smoked bacon from the Ellice Meat Market that I pulled out of the freezer for this soup.  Just unwrapping the bacon transported me back to the butcher shop with its lingering smoked meat smell.

This soup is sure to surface again in my kitchen – maybe swapping out the shrimp for a tin of clams and the chicken broth for some clam juice?  Either way, you should give it a try sometime soon!

Most of the ingredients at the ready 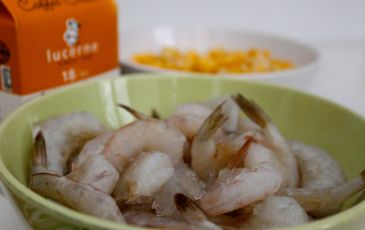 Sizzling bacon – have you seen a prettier sight? 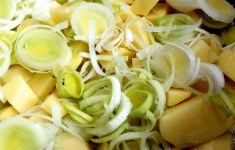 Caramelized flavour is released in the soup

One of my go-to kitchen gadgets: the immersion blender