I’ve been over at my folks place for the past week and thought I’d share some of our Canadian Thanksgiving adventure!  A few months back, my dad asked if I’d like to help him make a turducken for our Thanksgiving feast.  “For sure”, I said, without hesitating even a second!  Within the week, I found something unusual on Instagram that equally piqued my interest – a pie-cake!  Wanting to keep a bit of a theme of stuffed items for dinner – I suggested we make a scaled-down version of the pie-cake.  What is better than a slice of pie for dessert?  Well, a slice of pie baked inside a frosted cake, of course! 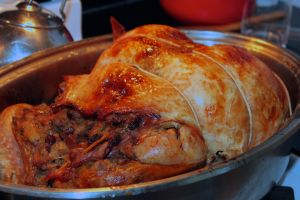 We ended up being a decent sized group for Thanksgiving – my brother Marc and his family drove down for the weekend, my niece Acacia, her fiancé, and her mom joined us as well.  We took the opportunity to venture to the local marina for some family photos.  A bit of wind, a trigger-happy photographer and a rambunctious Boston Terrier made for a entertaining distraction ahead of dinner.

Now to explain the turducken – if you haven’t guessed it by now, it is a turkey stuffed with a duck stuffed with a chicken!  It sounds a bit precarious and complicated but is pretty straight-forward to execute.  First thing on the agenda is to debone the fowl.  With a very sharp knife, we sliced along the birds’ backs and carefully followed the ribcages down to the breastbone.  With some patience and persistence, the three birds were deboned in a jiffy.  The only difference for the deboning process concerns the wings and legs – chicken and duck wings contain smaller bones and are completely removed.  Wings and drumsticks are kept on the turkey so the finished product still resembles the original bird.

There is a layer of stuffing between each bird so that the assembled trio form a complete boneless roast of fowl.  We opted for a very simple stuffing with dried cranberries and extra celery for crunch and texture.

As for the assembly, the turkey was laid on the countertop with stuffing added to all the crevices.  A thin layer of stuffing layered then with the duck – more stuffing in all the right places and finally the chicken is laid upon the pile of deboned fowl.  Add the rest of the stuffing – filling in the turkey extremities and time for suturing.  There was a discussion on how to bring it all together – some thought one bird at a time – but I insisted that we should be able to bring the turkey carcass together and everything within would fall into place.  A third set of hands helped keep this task manageable!  A slather of room temperature butter and our turducken was covered and laid to rest in a 350 F oven for 4-5 hours.

The beast let off a significant amount of liquid which was perfect for tasty gravy.  Once an internal temperature of 175 F was reached, we let the turducken rest for 10 minutes then out came the electric knife.  The stuffed ‘roast’ sliced very nicely and the three components birds were easy to identify.  Cranberry sauce and a bit of gravy will make this a new Thanksgiving tradition!

As for the pie-cake – I arrived to a freshly baked pumpkin pie – thanks to Chef Ed!  We whipped up a spice cake batter and slipped the pie into the cake pan.  We baked it off, cooled and iced with cream cheese icing.  This dessert will surely turn into a new holiday tradition!

Lined up and ready to go!

Duck on the turkey 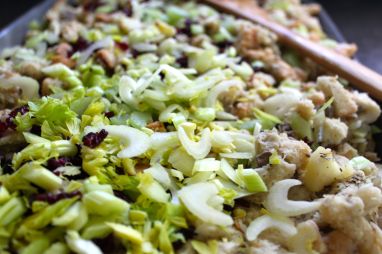 Stuffing on the duck

Throw on the chicken

Some skewers and persistence brings it all together

Closing up the bird!

A bit of bondage in the kitchen

Buttered up and ready for the oven 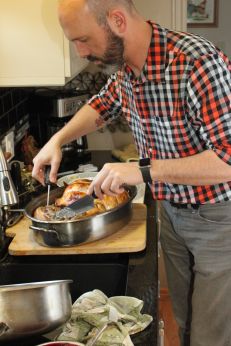 Out of the oven, rested – let’s carve!

There are the birds – chicken, duck & turkey 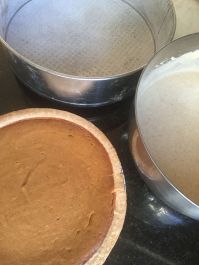 Pie-cake put together ready for the oven

Marc and his little guy 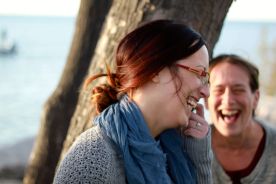